HomeNewsFire District Teams with Foundation to...
February 5, 2017 WWFPDeveloper in News

At a meeting of the 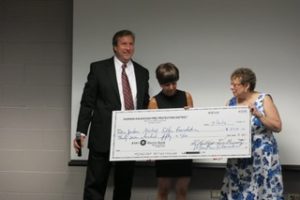 Lake County Opioid Initiative last week, participants learned donations were going to make up a shortfall in kits to revive people who have overdosed on opioids. (Nicasa)

The supply of Narcan kits police carry to help revive people who have overdosed on an opioid was dangerously low, according to the Lake County Health Department, but then a foundation and a fire protection district came to the rescue. Plus, the new kits that are being bought are described by advocates as an easier-delivery nasal spray type that was fast-tracked by the U.S. Food and Drug Administration.

“We could have been in dire straits if it wasn’t for the Filler Foundation of Highland Park and the Warren-Waukegan Fire Protection District,” said Susan McKnight, coordinator for the county’s substance-abuse program.

Phillip DeRuntz, a trustee with the fire district, said that at the last monthly meeting of the Lake County Opioid Initiative, he learned the health department was down to its last 50 kits. Then Susan Guggenheim of the Filler Foundation spoke and said officials were starting a matching grant program for kits up to $25,000.

“I took the information back to my board and they were ecstatic to help,” he said, joking about how the fire department was helping out the police department, a relationship that isn’t always smooth.

“I told the next meeting that the fire protection district wanted to support law enforcement, and there were all these police chiefs there, and they laughed and applauded,” he said.

McKnight said the new kits, which have two doses per kit, is from a company called Adapt Pharmaceutical and do not have to be assembled like some pharmaceutical devices. It can also be used in just one nostril where others need half a dose in one nostril and half in another.

For the last two years, the health department has secured 3,000 kits a year for distribution among the 2,000 law-enforcement officers in the county from the Virginia-based Kaleo company. Because of a shortage this year, the department was only able to provide 1,000 kits, which were the injectable type.

Guggenheim said the Filler Foundation was created by Mark and Julie Filler of Highland Park, who lost their 23-year-old son after he got hooked on opioids after a sports injury. He was revived once at home by paramedics during his fight with the addiction and was sent to rehabilitation, but then a few weeks after he got home, he died of an overdose.

“This was an area we could make an immediate impact and save a life,” she said of the foundation’s gift of $40,000 and the matching grant challenge of up to $25,000. They matched the fire district’s $3,750 and have received more donations for the program, including a recent $1,000 contribution from Compass Health of Northbrook and $1,800 from the Vernon Hills Police Department.

She said they also now have a text-line donation source where individuals can contribute any amount by texting “Hero23” to 41444.

“You can donate a dollar if you want, all through the text,” Guggenheim said. “It’s sad that we need this, but we’re happy to help.”